The abstraction provided by the OS of a running program is something we will call a process. 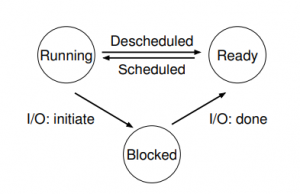 A process has an execution state that indicates what it is currently doing:

In this interlude, we discuss process creation in UNIX systems. UNIX presents one of the most intriguing ways to create a new process with a pair of system calls: fork() and exec(). A third routine, wait(), can be used by a process wishing to wait for a process it has created to complete.

The newly-created process (called the child, in contrast to the creating parent) doesn’t start running at main(), like you might expect (note, the “hello, world” message only got printed out once); rather, it just comes into life as if it had called fork() itself.

A final and important piece of the process creation API is the exec()
system call. This system call is useful when you want to run a program that is different from the calling program.

The shell is just a user program. It shows you a prompt and then waits for you to type something into it. You then type a command (i.e., the name of an executable program, plus any arguments) into it; in most cases, the shell then figures out where in the file system the executable resides, calls fork() to create a new child process to run the command, calls some variant of exec() to run the command, and then waits for the command to complete by calling wait(). When the child completes, the shell returns from wait() and prints out a prompt again, ready for your next command.